Getting Real with BeReal

Unless you’ve been living under a rock, you will have heard of the new social platform leading the charge back towards online authenticity. Aptly named BeReal, this platform sends its users a notification, and within 2 minutes they must share pictures (taken simultaneously with the fronts and back camera) of what they’re doing, who they’re with and where they are. No one can predict when the notification is coming, and users are “shamed” for posting late, with how late they are being branded above their post.

Over the past couple of years, “authenticity” has become a buzzword with the majority of online users—mainly referring to brands and influencers being honest with their audiences. As authenticity became seemingly vital to social media users, we began to see a shift from the aesthetics-based social media content to casual, unedited content.

Brands began showing their personalities more, and influencers more readily showed their vulnerable sides. However, there’s only so far authenticity can go when social platforms and success are still measured by likes, comments, and shares. There will always be an ulterior motive when a brand or influencer posts seemingly authentic content; it’s a strategic move rather than a genuine one.

This is where BeReal comes in. Although users can still gain BeReal’s version of likes (RealMojis—instant or pre-taken selfies), and comments, the photo-element of the responses still leans into an in-the-moment feel of authenticity.

On BeReal, there’s no algorithm, ads, or egos. You have 2 “feed” options, one with friends you’ve added, and another Discovery page that shows content from people across the globe. All it shows is the time someone posted their BeReal, in chronological order.

“yeah download bereal its fun to see what people are up to!”

the things people are up to: pic.twitter.com/uDGr703gzJ

While there’s no way of stopping a user from waiting to post their BeReal til a time they’re doing something more exciting (a one-off Instagram Story, almost), the majority of users have accepted that their BeReal memories will mostly be full of semi-mundane day-to-day life. And honestly, this just makes it all the sweeter when the BeReal notification hits and you’re actually doing something exciting.

So, considering authenticity is the new hot commodity, how can brands make the most of BeReal, despite the platform being “anti-ad”?

How brands can BeReal

BeReal has quickly risen to become one of Gen Z’s most used apps, even if only for two minutes a day. Where there’s a consistent audience, there’s an opportunity for brands.

But how can brands make the most of a platform that’s designed to be anti-ad AND anti-brand?

Chipotle was the first brand to create a BeReal account and post an exclusive discount code, offering the first 100 users a free meal, if they entered the code while ordering through its app. 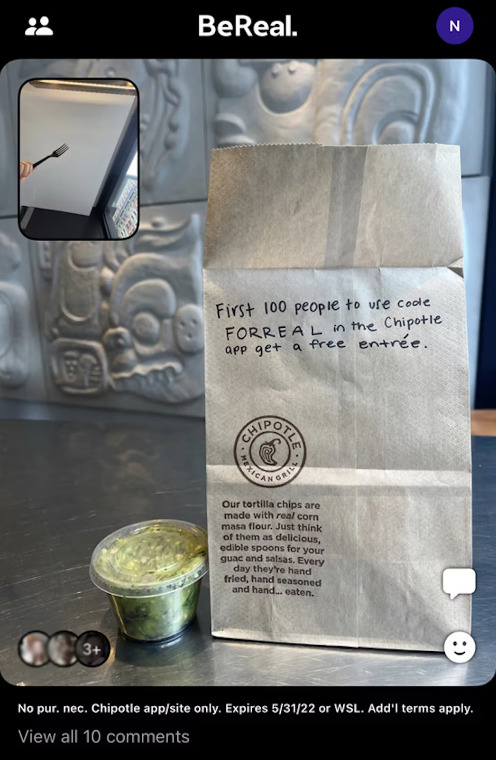 By using this method, Chipotle is creating hype around the brand and its exclusive offers. It’s not trying too hard to be relatable, and gives its BeReal account a real purpose.

e.l.f Beauty is using BeReal to give its Friends/Followers exclusive access to BTS content at e.l.f HQ, including sneak peeks of product drops, photo shoots, and office happy-hours. The beauty brand kicked off its BeReal launch with a giveaway of a skincare kit from its bestselling line for its first 150 followers, with a limited time promo code.

e.l.f Beauty’s BeReal strategy makes sense considering it’s Gen Z’s current favourite makeup brand. Gen Z wants to know the ins and outs of a brand; e.l.f Beauty can use BeReal to be completely transparent with their audience, and show the people behind the brand’s success.

What are the BeReal opportunities?

Brands have already begun creating more off-the-cuff content for TikTok, but they have to take it a step further for BeReal. They can’t just enter the app in the hopes of grabbing eyeballs and attention; they need to use it with purpose. Instead of thinking about authenticity, brands should consider how they can humanise themselves.

Gen Z wants to be able to connect with brands at an emotional level. You can’t just be relatable, you need to be human.